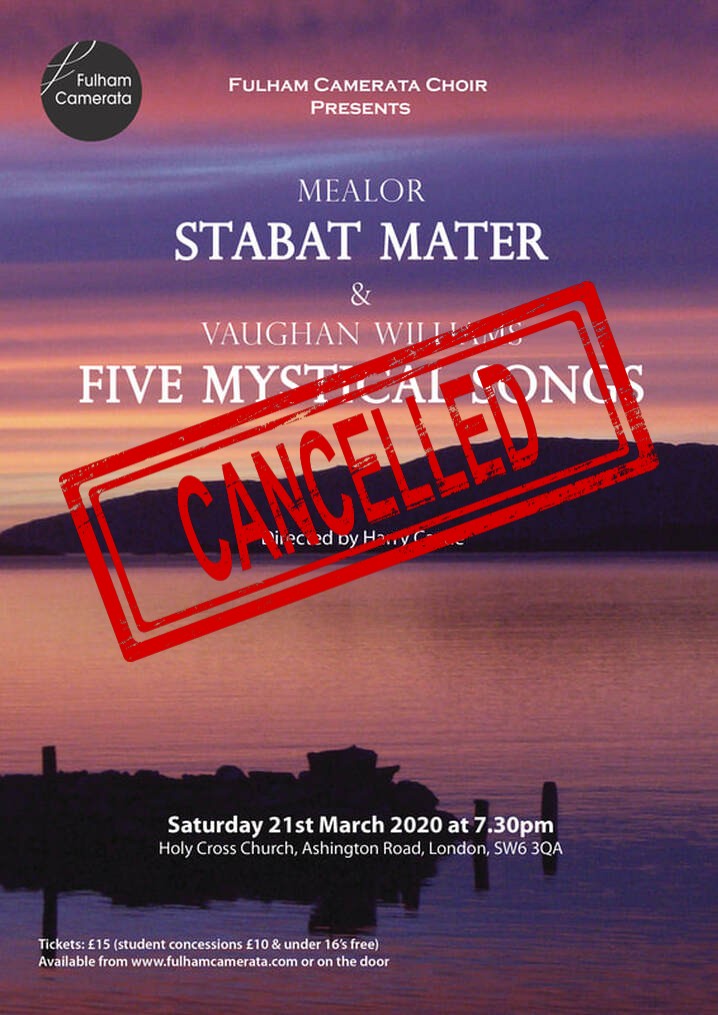 Tickets can also be purchased on the door. Car parking is available in the surrounding streets. The nearest tube is Parson's Green.
Buy Tickets

Concerts are currently on hold pending easing of lockdown. Normally our next concert would be during our Autumn term. When known, dates and details will be announced here. In the meantime, the choir is keeping in tune by meeting over video-conferencing, as reported in News. 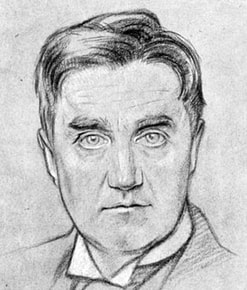 Following the death of Purcell in 1695, English music went into a long period of decline that was not reversed until the late 19th century with the emergence of Elgar, followed by a whole new generation of talented composers. The leading figure of this younger group of musicians was Ralph Vaughan Williams, who for nearly sixty years remained one of the most influential figures in English music. His work spans nine symphonies, concertos for piano, violin, oboe and tuba, five operas, chamber, ballet and film music, and a large body of song and orchestral choral works including The Lark Ascending and Fantasia.

Born in the Cotswolds in 1872 and educated at Charterhouse School, the Royal College of Music and Trinity College Cambridge, Vaughan Williams took three years off his age to volunteer for the army in Word War 1. He was sent to France serving as a stretcher bearer and later in charge of both guns and horses. The carnage and the loss of friends affected him deeply and influenced his music after the war.

An atheist in his youth, he settled down into cheerful agnosticism in spite of drawing inspiration from the liturgy and music of the Anglican church and the language of the King James Bible.

Vaughan Williams studied with Bruch in Berlin and Ravel in Paris, and had a long and deep friendship with Gustav Holst, which was crucial to the development of both composers.

He was married twice (his first wife being Charles Darwin’s niece) and was buried in Westminster Abbey near Purcell. A knighthood was offered and refused, but the Order of Merit was conferred upon him in 1935.

Composed by Vaughan Williams between 1906-1911, they are based on four poems from the 17th century Anglican priest George Herbert. Like Herbert’s simple verse, the songs are direct and with the same intrinsic spirituality as the original text. However, the musical styles of each of the songs vary quite significantly.

Easter and I got me flowers are two halves of the same whole and together with the third and fourth songs, Love bade me welcome and The Call, are quiet, personal meditations in which the baritone soloist takes a key role.

In Love bade me welcome the choir has a wholly supporting part, quietly singing the plainsong melody O Sacrum Convivium and in The Call the chorus does not feature at all.

The final Antiphon however, is probably the most different one of all; a triumphant hymn of praise sung by the chorus to full effect. 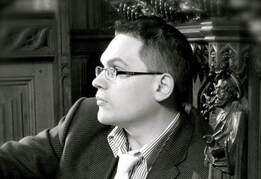 Paul Mealor, a Welsh composer, became the first classical composer to hold both the classical and pop chart No 1’s at the same time in December 2011. His piece Wherever you are, for the Military Wives Choir and Gareth Malone, has a text compiled from letters written to British Army military personnel deployed on active service in Afghanistan by their wives or partners. It was also nominated for Best British Single in the 2012 Brit awards.

Paul Mealor shot to international fame in 2011 when 2.5 billion heard his motet Ubi Caritas performed at the Royal Wedding of Prince William and Kate Middleton, the present Duke and Duchess of Cambridge. His music has been commissioned and performed at many festivals and by many orchestras and choruses, and broadcast on every major TV and radio station throughout the world. He is signed to Decca Records and his first album spent six weeks at the top of the Specialist Classical Charts.

Mealor also wrote a number of works for Queen Elizabeth II’s Diamond Jubilee. and made his Carnegie Hall debut with a sell out performance of Stabat Mater. Since 2003, he has been Professor of Composition at the University of Aberdeen and has held visiting professorships in Scandinavia and the US.

He has received many awards and honours for his music including the Glanville Jones Award from the Welsh Music Guild in 2013 for his outstanding contribution to music in Wales.

Stabat Mater Dolorosa, the thirteenth century Christian hymn dedicated to Mary, the mother of Jesus, sharing his agony and pain at the foot of the cross, has been set to music by many Western composers. Mealor’s Stabat Mater, divided into four sections, has a voice of its own and is accompanied only by the piano, building up from the plainsong of the first section to the final part offering a powerful climax with the full choir singing, before the work ends quietly with high voices and piano gradually dropping out.

Quoting Mealor from his CD booklet “Of all the pieces on this disc this is the most deeply personal, as I composed it as a means of climbing out of a very dark time in my life……Divided into four sections, to be performed without a break, my setting of this powerful poem attempts to portray the journey from darkness, despair and suffering to light , rest and final, everlasting peace”.

The piece is dedicated by Mealor in memoriam to his grandparents with love and affection.

Sebastian Johnson, bass, also studies music at King’s College, London. He is aiming for a career in choral and composition and recently premiered James MacMillan’s Symphony Le Grand Inconnu in Edinburgh and London with The Sixteen and Britten Sinfonia. He performs regularly for King’s College Chapel Choir.
Both our soloists are choral scholars with Fulham Camerata.

The concert accompaniment comprises a string ensemble and harp, adding so much colour and emotion to the performance. The string players are drawn from the Royal College of Music - where our regular keyboard accompanist studies - and from former colleagues of our music director from  Durham University. The harpist is married to one of our tenors. This is the first time they are performing together; at Fulham Camerata we believe in keeping it in the family!